White Bean Fritters with a Yogurt Dip
Adapted from: http://www.huffingtonpost.com/the-pollan-family-table/white-bean-fritters-with_b_7942556.html?ncid=tweetlnkushpmg00000045

I thought I could follow this recipe but I was using cooked dry beans, so they were not easily mashable, so I had to improvise.

Then with the dip, I did not have all the ingredients, so I had to make substitutions.

Process:
In a bowl, add ingredients. Stir well.
Set aside.

Process:
Add fritter batter ingredients into a separate bowl. Stir well.
Add fitter batter to bean mixture.
Stir thoroughly.
Add olive oil to skillet. Heat medium-high.
Add a tablespoon of mixture at a time.
Generally, a small skillet can hold 4 fitters with room to turn fritters over.
Cook fritters for about 2-3 minutes on each side.

*more on the cucumber cooler later. Essentially, I put lots of cucumber slices in a small pitcher of water and put it in the frig for a few hours.

Process:
Mix the above ingredients in a bowl or container with a lid.
Stir well.

Note: I do not add salt to most recipes. 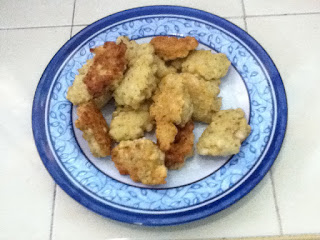 I liked the Yogurt Dip.

I am enjoying making sauces, dressings, and dips. It's giving me an idea for another small cookbook :-)

Email ThisBlogThis!Share to TwitterShare to FacebookShare to Pinterest
Labels: Recipe

Process:Mix the above in a container with a lid to save what is not used.While mixing, shred chicken chunks.Add half of mixture in a bowl.Add toppings.Toppings:Imitation bacon bits1/8 green pepper, diced1/4 tomato, dicedA few slices of avocadoA dash of paprikaI found this salad fresh, tasty and crunchy. 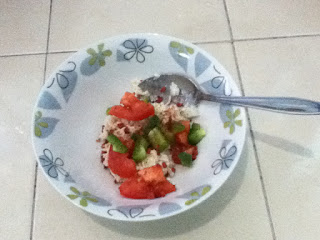 Email ThisBlogThis!Share to TwitterShare to FacebookShare to Pinterest
Labels: Recipe

Hmmm, I had followed the news that Costco (Merida, Mexico) was building a new store in the north.

But, I failed to pickup on the actual location.

But, I decided to see if I could check out the Costco store. I thought they might have a day pass but they didn't. Then I decided to see how much a membership cost. It was $450 pesos for two people. So, I joined and put my friend on the account as the second person.

So, now I could browse the store.

Going to Costco is like going grocery shopping for a restaurant because the size and quantity of the items are enormous. I don't need six bottles of mayo.

But, after going up and down every aisle. I did find three things that I thought would suit my "budget", rather laughable since I already spent $450 pesos.

Anyway, I got a six-pack of canned chicken. To me, each can held about what I would have gleaned from a whole grilled chicken from a local take-out (after one meal). Take out chicken $80 pesos, one can of chicken $193.35/$32.00 each. I thought having another source of chicken would be useful.

Then, I got a six-pack of 210g (8oz) mushrooms, which I thought was a good deal because I use a lot of mushrooms. I saved a few pesos.

Then, I got a large bag of dried blueberries. Something I have never tried but I liked the idea, just like having frozen fruit, dried fruit seemed like a good pantry item. So far, I have used them as part of a yogurt topping. They are tasty. I need to try to rehydrate them, too. 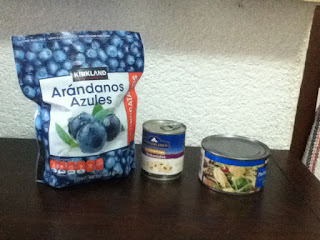 I also got something else. A credenza with portable cloth file drawers.

I live in a one-bedroom apartment with little storage, so, the credenza is useful to store all my notebooks, writing, correspondence and jewelry-making supplies that were previously stored in cardboard boxes that sat on the sofa.

But, the credenza was a DIY affair. I had to put it together using over 30+ dowels and various nuts and bolts to secure 11 pieces of "heavy" particle board.

If I move, I will have to have it packed and crated so it doesn't fall apart.

On the bright side, I had recently gotten a price from one furniture maker for something similar for $6000 pesos. Too rich for me, so when I saw this for about $2,000.00 pesos, I thought it was a good idea.

While the credenza may not have been the best decision, it does make the living room look so much neater and I am more organized. Got to look on the bright side. 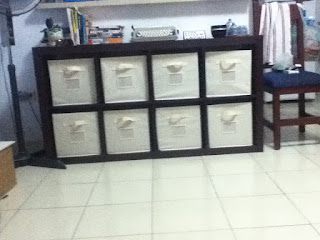 Posted by Ria Stone Blog at 9:30 AM No comments:

Email ThisBlogThis!Share to TwitterShare to FacebookShare to Pinterest
Labels: Frugal

You could say I failed my summer shopping challenge.

I lasted six weeks without going to a grocery store. I used some of my pantry supplies and made several vegetable purchases from nearby tiendas.

But, I like Ginger Ale, carbonated water, toilet paper and other bulky things. So, I made a trip in June to get the bulky items and probably got a few more things. Then in July, I made another trip. In total, I spent about the same as I usually would but I probably ate more fresh vegetables than usual.

Then, there was my Costco adventure (that's another post).

And, I have long lists of recipes ideas to try and, of course, there are ingredients I don't have, like: nutmeg, cardamon, raspberries, cabbage, and sour cream (but, I may use a substitute when I get to that recipe.)

During the six weeks I did not go to the grocery store, we had several "brown-outs" and I failed to recognize that the food in my refrigerator may have been affected. I had to throw out some leftovers. But, I had less in the refrigerator than usual, so the loss was minor. That's one positive.

I have not stopped looking for ways to reduce my grocery expenses. Another positive is, I can now shop at ISSEY, a Mexican grocery outlet, while their prices are often a little lower, their item selection is not as robust, for example, they don't have Ginger ale.

Posted by Ria Stone Blog at 9:27 AM No comments:

Email ThisBlogThis!Share to TwitterShare to FacebookShare to Pinterest
Labels: Frugal

I go to my blog's recipes when I cook because I can't remember all the ingredients or processes.

In addition, I continue to look for healthy recipes using available vegetables that keep longer than lettuce and can be frozen. Brussels Sprouts is one of those vegetables.

Shortly after purchase, I blanched a batch of brussels sprouts and froze them. Blanching, to my understanding, means you boil water than add the prepared vegetable and cook for a short amount of time, so the vegetable is softened but not fully cooked.

Sources for "How to" Blanch Vegetables

Note: I did not use a gallon of water. I filled a medium sized saucepan 3/4 full of water and added a dash of salt. Nor did I use an ice bath. I rinsed the vegetables in bottled water. Then, placed them in a container and froze them.


When I started this dish, I did not take notes because I thought it would be a failure. But, when it turned out pretty tasty, I decided to post it in general terms.

Transfer half of the cooked pieces to a bowl. Refrigerate the rest.
Sprinkle with balsamic vinegar. 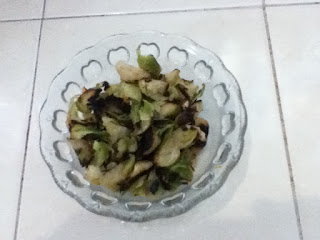 I have several other ideas for make a brussels sprouts recipes.

Posted by Ria Stone Blog at 9:25 AM No comments:

Recipes from the Kitchen of a Frugal Non-Cook Helping those who feel like an alien in the kitchen with simple, basic, o... 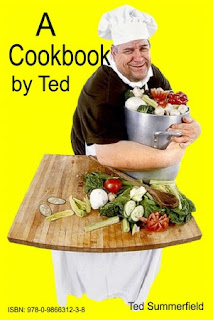